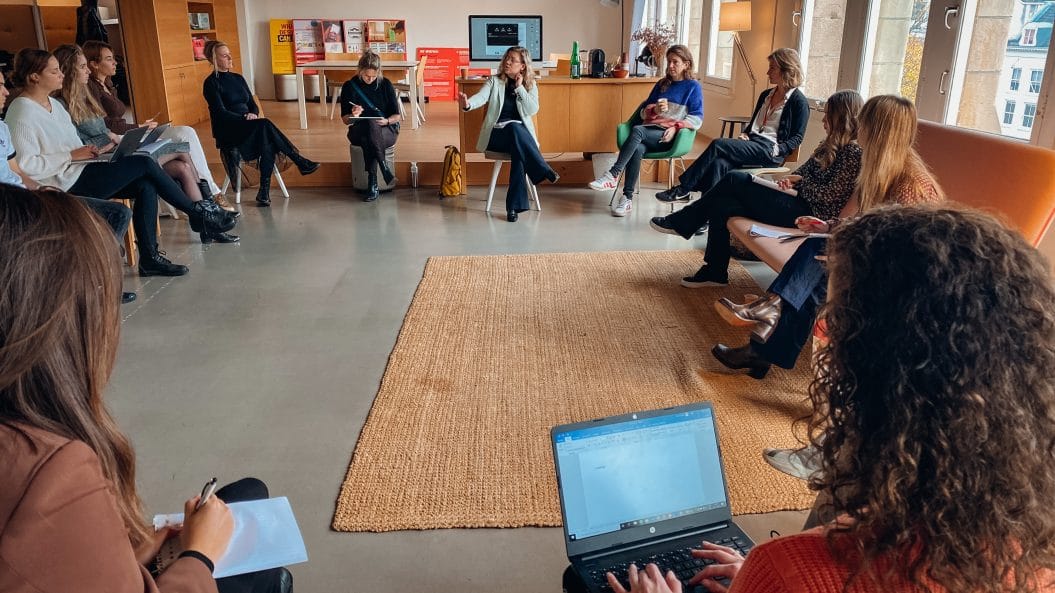 Addiction, environmental pollution, murders due to mistaken identity: during the kick-off at the Public Prosecution Service, students discover the world behind drugs

The short tracks have started again – Lab students and coaches from the Amsterdam ULT Lab and Haarlem Citylab met with representatives of the Public Prosecution Service and police officer Emile on 12 November to gain a better understanding of the framework conditions of the new project and the world behind drugs. The Public Prosecution Service would like to increase young people’s awareness of the negative consequences of drug use for society and the environment. The challenge: although this is a polarising and somewhat bleak topic, the students were asked to approach the problem in a positive and constructive way.

The Netherlands as an expert in the production of drugs

It is no secret that there is a strong connection in the Netherlands between drug use and the tourism and leisure sector, the context in which the ULT Lab operates. Cannabis and psychedelics are legal – there are about 160 coffee shops in Amsterdam alone – and the Netherlands is known as an expert when it comes to the production of drugs. “The Netherlands entered the profession about 30 years ago and has since developed a certain expertise and knowledge,” explained police officer Emile via Microsoft Teams. This is also connected with the strong business spirit of the Dutch. The infrastructure is now so good that 85% of the drugs are exported, for example to Australia and the US. And although both ‘hard drugs’ and ecstasy and cocaine are actually illegal in the Netherlands, this solid infrastructure makes access to the entire spectrum of drugs easy for residents and visitors alike. This is also problematic in the tourism sector. Amsterdam’s mayor Femke Halsema therefore plans to make weed, hash and brownies accessible to residents only and not to visitors. By means of this measure, she wishes to combat mass and ‘soft-drug’ tourism.

However, this does not change the fact that drugs will still enjoy great popularity among young Dutch people and will continue to cause serious problems for society. This is something that users only tend to be aware of to a limited extent, if at all. The murder of the well-known journalist Peter R. de Vries on 15 July of this year may also be connected with the underworld. According to the Public Prosecution Service, many people are unaware of this. It is also difficult to engage in constructive and positive dialogue on the subject. People are quick to point the finger at individuals. For this reason, the Public Prosecution Service is focusing directly on students who belong to the largest target group for drugs. They want to find out from students how they can make the younger generation aware of the social and environmental impact of drugs without moralising and pointing fingers.

The world behind drugs

The Public Prosecution Service is responsible for the investigation and prosecution of criminal offences. It leads the investigation, appears in court and ensures that the penalties are enforced. Josephine has been working for the Public Prosecution Service for four years and tried to give the students a clear picture of the world behind drugs by means of anecdotes from her professional life. Murders, stabbings, money laundering and how this disrupts the entire system, as well as the immense damage to the environment caused by the dumping of drug waste; all these aspects were mentioned. Police officer Emile showed the students images of drug labs and dumped drug waste. He talked about rivers full of dead fish and explosions, with people and nature being put at risk every day.

Despite the seriousness of the subject, however, there was also something to laugh about. Josephine shared that during her investigations she often encounters funny names used by drug traffickers, such as ‘Pablo Escobar’. “Come on, be creative,” she said with a smile.

After the students had been given the opportunity to ask questions and discuss the challenge with the Public Prosecution Service, they were able to share the status of their research and initial concept ideas with the representatives of the Public Prosecution Service. One group considered lightening the conversation about drugs among young people with the aid of a card game or culinary menus that they wish to combine with information about the consequences of drugs. In conversations with young people on the street, the Haarlem group noticed that the consequences for the environment were never mentioned. Among the few respondents, however, there were several people who had experienced an overdose or a bad trip or even knew someone who had died of an overdose. One of the Lab students said that people in her immediate vicinity had been accidentally killed because of a case of mistaken identity. This kind of thing was confirmed by Josephine of the Public Prosecution Service. “Often these are very young people who only get paid 20,000 euros for the murder, then they make a mistake and accidentally shoot the wrong person.”

During the kick-off, the students became aware of the fact that a very harsh world exists behind such tiny pills: “I look at it very differently now,” admitted one of the students who had openly shared with the group that she sometimes used drugs at festivals. Some people who had never used drugs before now found the idea even less appealing, while another student admitted that she might also turn a blind eye in the future. As a result, the diversity of the target group already became clear within the small group of Lab students alone. According to the Public Prosecution Service, however, this is precisely where they need to keep their finger on the pulse to find out exactly how to attract attention.

The presentations, when the students will present their final concepts, will take place on 20 December. So don’t forget to keep an eye on our website! You can read more about other concepts that the students have previously developed in a different context here. An overview of all current Creative Future projects can be found here.

This report was published after consultation with the Public Prosecution Service.